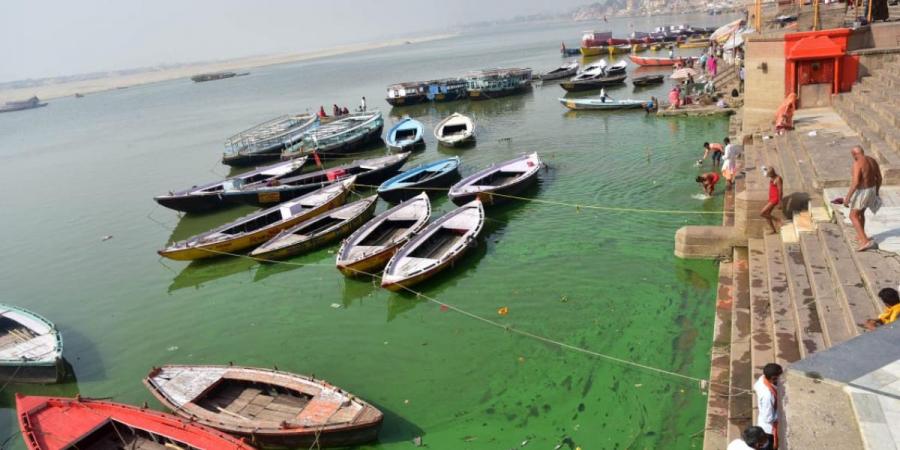 Why in the News?

Recently, there has been an increase in green hue in Ganga river, experts suggest it is due to algal bloom.

What is an Algal Bloom?

An algal bloom or marine bloom or water bloom is a rapid increase in the population of algae in an aquatic system.

1. It may occur in freshwater as well as marine environments.

2. Blooms that can injure animals or the ecology are called “harmful algal blooms(HAB)”.

3. Harmful Algal Bloom can lead to fish die-offs, cities cutting off water to residents, or states having to close fisheries.

1. Nutrients – The Eutrophication (nutrient enrichment) of waterways is considered as a major factor. Main nutrients contributing to Eutrophication are phosphorus and nitrogen. Sources such as runoff and soil erosion from fertilized agricultural areas, erosion from river banks, river beds, land clearing (deforestation), and sewage effluent.

2. Temperature – Early blue–green algal blooms usually develop during the spring when water temperature is higher and there is increased light. Water temperatures above 25°C are optimal for the growth of Cyanobacteria.

3. Light – They have optimal growth when intermittently exposed to high light intensities.

3. Exposure to Cyanobacteria or their toxins may produce allergic reactions such as skin rashes, eye irritations and respiratory symptoms.

4. They restrict the penetration of sunlight resulting in death of aquatic plants, and hence restricts the replenishment of oxygen.

It was the Arabian Sea that experienced the most number of blooms over the decades. Also, the Bay of Bengal recorded blooms by and large during the northeast monsoon when cyclonic storms occurred in the region.